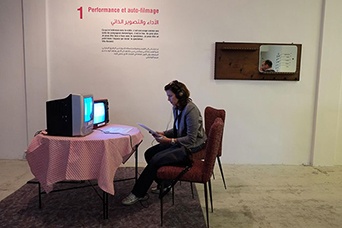 The videos in this exhibition were presented in a «vintage» setting. The staged living rooms in the exhibition space invited visitors to view works of video art in their original historical dimension, in a «homely» atmosphere. Even though the selection was not exhaustive, it allowed to trace the development of video art over the course of two decades. For twenty years, artists had researched the potentials of this emerging medium as an artistic form that can be employed toward critical ends. As the curator, Christine Van Assche writes, «in the age of «all digital» video, we feel that it is important to reconsider the trajectory of this medium, which has been, for a period of fifty years, influenced by every aesthetic movement—from performance, the Fluxus movement, minimal, conceptual and post-conceptual art to current research in the field of Cultural Studies.»

The exhibition was organized in three sections: «Performance and Self-filming,» «Television: Research, Experiments, Criticism,» and «Attitudes, Forms, Concepts.» In the 1960s and 70s artists in Europe, North and South America used the first portable video cameras. The recordings of their performances were often socially and politically driven. One of the first to use video as an art medium was Nam June Paik. In 1965 he took up the first portable video camera, Sony′s Portapak, and began filming himself in close-ups. In 1980 Mona Hatoum filmed her performances using the same camera. The resulting works open the exhibition with the first thematic emphasis «Performance and Self-filming.» The relationship between the medium of video and television makes up the second thematic in the exhibition. During this period, the television industry wanted to define itself apart from cinema by seeking new and different productions and aesthetics. In France for instance, the Research Department of the ORTF, the official body for radio and television broadcasting, invited directors and artists to use the first video filming and editing equipment. Jean-Christophe Averty, Jean-Luc Godard and Thierry Kuntzel produced numerous works in this context. In the United States, television channels set up similar laboratories in which Nam June Paik and William Wegman were involved. Soon enough, however, many artists began to adopt a critical stance toward television as a means of communication, following the theories of Ant Farm and Marshall McLuhan’s «the message is the medium.» Some private initiatives also took place such as in 1969 and 1970, when the famous German producer Gerry Schum commissioned artists like Joseph Beuys, Daniel Buren, and Lawrence Weiner for a televisual exhibition.

The third section was dedicated to more conceptual research produced by artists, who for the most part come from a background in fine arts, and to the integration of video works into museums. International artists employed video, questioning it as a medium by highlighting its properties and emphasizing the performative aspect through the body. In this section, there were works by Daniel Buren, Valie Export, and Marta Rosler among others.

Your ticket for the: Video Vintage