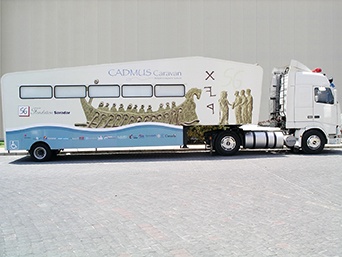 The name of the caravan “Cadmus” was suggested by Mrs. Nina Jidéjian. “Cadmus” the son of the King of Tyre, is seen – on a Third Century A.D Bronze coin minted in Tyre – offering a papyrus roll to a Greek delegation, thus referring that “Cadmus” passed on the Phoenician Alphabet to the Greeks. Inspired by the idea of transferring knowledge, this mobile computer school is named “Cadmus® Caravan” since it seeks to communicate and disseminate information and technology.

Your ticket for the: The ‘Cadmus Caravan®’ Project